My husband and I have always been so interested in different cultures. When we travel, we make it a point to not always be the Americans staying with other Americans at the resorts. We love getting out, meeting people, seeing new sights, eating food that….we aren’t always sure what it is, but always enjoying every second of life and what it holds. We always figure…if we are going to another country, city or state…DO what they’re doing. I can eat tacos and drink a Mexican beer on my deck any old day, but not always have it fished for, home cooked from the new friends we met down in a fishing village while trying to perfect our Spanglish. We have gotten ourselves into the greatest of situations (dancing the Tango in Union Square with an all-Italian dance class, getting completely lost on a 4 hour dirt-road trip and having to drive an SUV through a river and pay off the policía to get to the airport on time in Costa Rica or being invited to a Vietnamese family dinner at a “new” friend’s house in Hoi An)) This planet is HUGE and we have a B I G list of places we are eager to see….this spin on the globe took us to Vietnam. 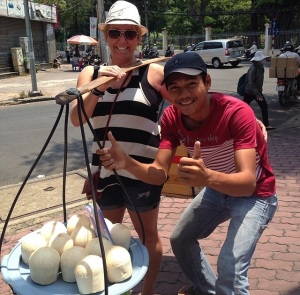 Hubs may have found himself a new career

Boarding a plane for Asia you just know it’s going to be a long flight. In the weeks leading up to this trip I wondered how I would EVER keep myself busy for 20-hours. (Turns out a sleeping pill was all that it took to get me through Japan and onto Vietnam. Who knew?)  That one little pill also landed this 8-year Vegan into a situation of eating chicken without even knowing,  (and airline chicken to boot!!)  all while in a little state of what I like to call: Awake and Eating While Completely Asleep.  (That’s another story)

I am going to go back in time a little. When we returned from Vietnam I was in FULL-ON training mode for Ironman Boulder, so I never took the time to sit and write about our adventures. And there were plenty.

My husband and I had starting planning the trip about 2 months before we left. We had always wanted to visit South East Asia, and were torn on just which country to hit first. Now that we’ve been there (and plan on going back) we realize that once there, it is VERY easy to get from country to country via little airport hops. Had we known this going in, Vietnam wouldn’t have been our only stop. And because you need a Visa, along with a passport to enter VN, we would’ve bought a “multi-entry” visa instead of just single entry. *Note to self for the next trip.

Our flight took us from Spokane, WA to Seattle, to Tokyo, Japan and into Ho Chi Minh City, Vietnam. We left here in the afternoon and arrived in HCM around midnight 2 days later from our time zone. We fell right into bed after checking into our hotel. We could not wait to wake up and start on this new adventure.

At the Bến Thành Market

At the Bến Thành Market

HCMC is a bustling mecca of business, shopping and tourism. It is a huge city with a population of 7.3 million people. First thing we noticed was the amount of scooters/Vespas on the roadways. Millions! And that is not an exaggeration. It is their main source of transportation and they are extremely skilled and proficient on these things. Lining the streets double, triple and quadruple in a lane. To us, it seemed that there was not much in the way of traffic laws….but somehow they seem to just go with the flow. We were only walking and we had a hard time. We loved seeing the women on the back riding “side saddle” to their drivers all while talking and texting on cell phones and the families carrying groceries with a dad, mom, toddler, baby and dog on one scooter. (this is a true story and we saw it often) Like I said; mad scooter-ing skills. We felt as if we were in a human game of Frogger. Best advice we got: “Once you step off the curb, keep walking”… The first time we did this, 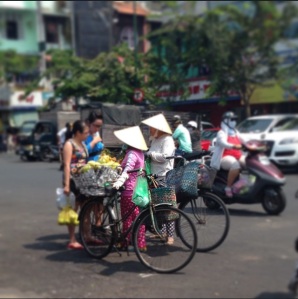 I was a ball of nervousness. I wanted to close my eyes as my husband held my hand and we crossed over many lanes of traffic in a bustling intersection in downtown HCMC. (Click here from some video I took) We did exactly what our friend told us however, and he was right….the scooters maneuver right around you. After a few hours of this it seemed second nature. We knew if we stopped suddenly that could cause an accident. They buzz right around you without any concern at all. Mad skills!! (Here’s the “Are we really crossing this street video?”) 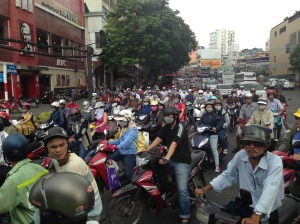 Our first three days in Vietnam we spent in Ho Chi Minh, we shopped, we ate (A LOT) and we visited the Củ Chi Tunnels and a Cuo Dai temple (check out my video here from inside the Temple)

Climbing down inside the Củ Chi Tunnels

The Củ Chi Tunnels were used by Viet Cong soldiers as hiding spots during combat, as well as serving as communication and supply routes, hospitals, food and weapon caches and living quarters for numerous North Vietnamese fighters. The tunnels are tiny and as we climbed through them I could only imagined what these soldiers endured. The have actually been made bigger for tourists but I was thankful to be a small woman while climbing through them underground. We loved hearing about the history that surrounded this area. 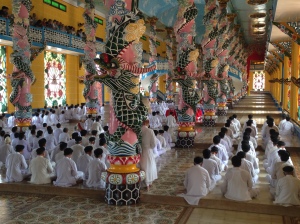 The Cao Dai Temple: Cao Dai (a.k.a. Dao Cao Dai or Caodaism) is a syncretist Vietnamese religious movement with a strongly nationalist political character. Cao Dai draws upon ethical precepts from Confucianism, occult practices from Taoism, theories of karma and rebirth from Buddhism, and a hierarchical organization (including a pope) from Roman Catholicism.

This was amazing to see. We visited during one of their prayer times and were able to go in to the balcony area to observe. We watched as they burned incense, chanted and spent time in worship. It was an incredible experience. We spent a lot of time here watching the rituals of this religion. Worshipers of Caodaiism come to the temple every 6-hours for this ceremony lasting 45-minutes around the clock. 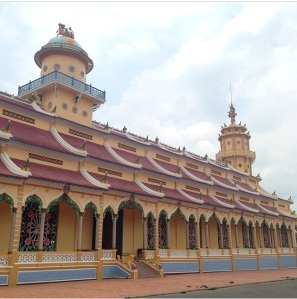 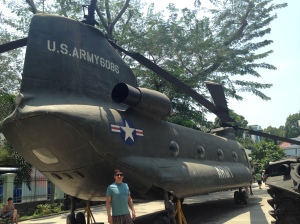 We also visited markets. The biggest one being Bến Thành Market. This place is ENORMOUS! We spent a lot of time walking through and seeing all of the interesting foods, candies, coffees, clothing, silks etc that people where selling and bartering with. I bought some delicious jasmine tea, lotus flower seeds, candy and some coffee. Even some Weasel Coffee.

We met some of the friendliest people who were always so interested in having a conversation with us. They try to speak English and many are very good, thankfully, because my Vietnamese needs some work. They would try to teach me, and would laugh and laugh as the words just didn’t form in my mouth and come out correctly. I had fun trying however and they loved trying to teach me. A very universal language laughter is…. 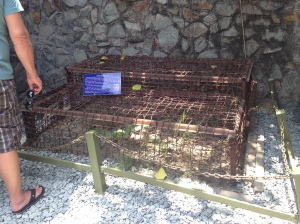 We spent a lot of time wandering the city and also visited the War Museum.  We loved the three days we spent in Ho Chi Minh City and cannot wait to go back. It’s a place seeped in deep history and culture.

After three days we boarded a plane for our next destination….Nha Trang, Vietnam on the South China Sea..

This was one of my favorite pictures. Look closely….

Did you see her? Deep in prayer…

Loved watching her pray and give an offering

Like Loading...
“I will not die an unlived life. I will not live in fear of falling or catching fire. I choose to inhabit my days, to allow my living to open me, to make me less afraid, more accessible, to loosen my heart until it becomes a wing, a torch, a promise. I choose to risk my significance; to live so that which comes to me as seed goes to the next as blossom and that which comes to me as blossom, goes on as fruit.” -Dawna Markova
Follow sporty mama life….. on WordPress.com

Cozying Up with a Good Book